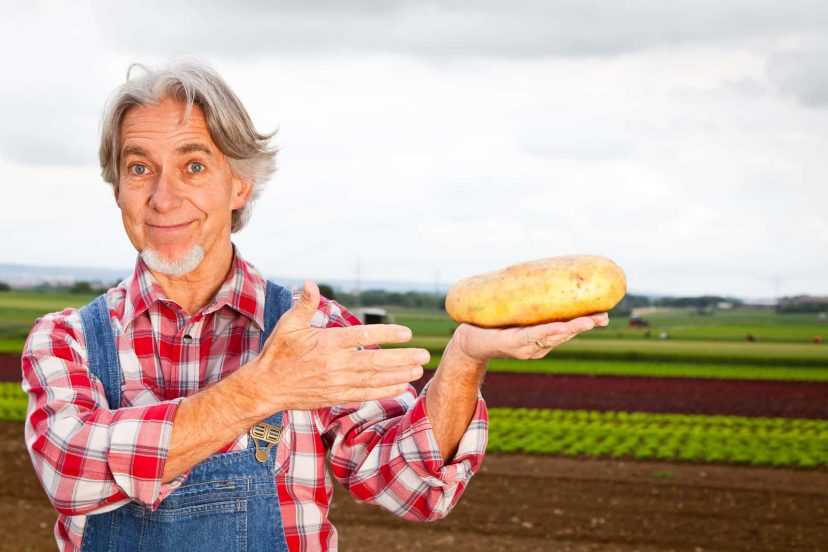 Potatoes are one of the most suitable vegetables to grow. It looks like a buried nugget of gold at the time of harvest. You can even grow potatoes in your own garden. Here in this article, I will give you complete guidance about the production technology of potato.

Potato always does best in full sunshine. They are aggressively rooting plants. They are the simplest crop when plant in a light, loose, and well-drained soil. They always prefer acidic soil having a pH of 5 to 7. They are very adaptable and produce a good crop under good soil and growing conditions. One key point to remember while potato cultivation, potatoes should be rotated within the garden they should grow with the gap of 3-4 years at the same spot.

There are different varieties of potato according to their growth rate. On the basis of growth rate, they divided into two types.

Maincrop varieties are usually big in size and also give an even bigger harvest. Most of the harvest is used to store for winter use. These varieties are typically harvested in late summer or autumn.

These varieties are further divided into three types.

These varieties give the early harvest. Some of them are Irish cobbler, Norland and mountain rose.

They give harvest after some week of early varieties. Red Pontiac, Viking, and chieftain are known as mid-season varieties.

They provide harvest a few weeks earlier than the main crop harvest but they are best in taste having smoother and waxy in texture. Katahdin, Kennebec, and Elba are known as late-season varieties. 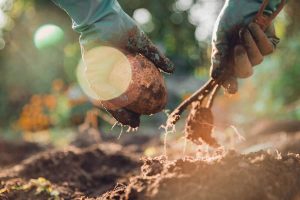 When to plant potatoes:

When you decide to cultivate potato, first thing came to mind which season or conditions are most suitable to plant potatoes. Potato is planted as soon as soil prepares within the early spring. One thing to remember is soil temperature should reach 450 because it is the optimum temperature for its growth. Moreover, the soil should be moist but it should not be in water-logging conditions.

Potatoes can tolerate a light frost but you must provide some frost protection for plants. If you wish to increase storage times and you have a long growing season. You can plant a second crop as late as and harvest them as late as possible.

Here are certain steps that are to follow while cultivating potatoes.

The potato is grown on almost any form of soil, except saline and alkaline soil. Naturally, loose soils supply the smallest amount of resistance for the enlargement of tubers are mostly preferred because they are enriching with organic matter and had good drainage and aeration. Moreover, the soil pH should be 5.2 to 6.4.

The potato is grown almost on any form of soil except saline and alkaline soils. Naturally loose growing potatoes involves extensive soil tillage. The soil must be harrowed until completely free from weeds roots. In most cases, three extensive plowing with frequent harrowing and rolling are needed before the soil reaches an appropriate condition, soft well-drained and well aerated.

Always start with organic, certified disease-free seed potatoes from the farm stores. If you buy from a farm store, then select the tubers which are already sprouted. If you do not get pre-sprouted tubers, then simply laying them out on your kitchen counter. Pre-sprouted potatoes can be harvested earlier than their non-sprouted kin.

Small, golf ball- size potatoes are directly planted into the soil. Otherwise cut large tubers into pieces. Always cut in an order that each segment has 2-3 eyes. The rationale for cutting the potatoes is because the numerous eyes on an oversized potato will create a crowded multi-stemmed plant which is not good because each stem competing for food and moisture which results at the end of bearing only small potatoes.

Next to cure the tuber cuttings. Either you can place under the sunshine or on the table counter at about 70o F for about 3 to 5 days. This process allows the cuts to become calloused. These calloused seed potatoes will help in the prevention of rotting.

Small tubers or pieces of tuber sown to a depth of 5-10cm. while planting potato the seed should be disease-free, well sprouted and each has a weight of 30g to 40g each. If you use excellent quality commercial seed it will give you a 30-50 percent increase yield.

The planting density of a row of potatoes depends on the scale of the tubers chosen. The crop should be grown on ridges. Almost 2 tons of seed is required for a hectare. Plant of each potato segment cut-side down in a 6 inches deep hole or trench. Maintain space each segment should 12 inches apart on all sides. Between each segment sprinkle 2 tablespoons of low-nitrogen, high phosphorous fertilizer. Then cover both potatoes and fertilizer with 2 inches of soil and water the soil well.

Earthing up around the stem:

New potatoes form on lateral stems or stolon overhead the seed potato, it is essential to hill the vines. When the green sprout achieves 8 inches tall, hide almost their top 4 inches with soil, chopped straw or shredded leaves. When vines raise up to 8 inches then hill again. Stop Earthing up when the vine starts flowering. Potato tubers like vampires have to be bound to board darkness. In fact, they will turn green if exposed to light and green potato can cause sickness if expended. Therefore, it is absolutely essential to stay the tubers covered with soil or mulch.

The use of chemical fertilizer depends on the number of accessible soil nutrients. Volcanic soil is deficient in phosphorus and in irrigated commercial production, fertilizer requirement is relatively high. However, potato can enjoy the application of organic manure at the beginning of a brand new rotation. It provides an honest nutrient balance and maintains the structure of the soil. Crop fertilizer requirement ought to be correctly estimated in step with the expected yield, the potential of the variability and also the intended use of the harvested crop.

The soil moisture content must be maintained at a comparatively high level. For best yield, a 120-150-day crop requires from 500-700mm of water. Water deficits in the middle to late growing period tend to cut back yield quite those with in the early part. Where supply is proscribed, water is directed towards maximizing yield per hectare instead of being applied over a bigger area. Because the potato includes a shallow scheme, yield response to frequent irrigation is considerable and really high yields are obtained with a mechanized sprinkler system that replenishes evapotranspiration losses for all or two days.

You can protect your crop from diseases by some basic precautions like crop rotation, using tolerant varieties and healthy certified seed tubers which can help to avoid great losses. There is no chemical control for bacterial and viral diseases but they will be controlled by regular monitoring and spraying when necessary.

You can harvest potato after two weeks of vine flowering if you like small or medium baby potatoes. Otherwise, you have to wait until potato vines start withering. Dead potato vines give us the signal that the tubers have reached maturity. When potato matures you can pull the mature potato by hand. In general, small new potato is often ready to harvest in early 10 weeks and full-sized potatoes take about 80-100 days to achieve maturity. 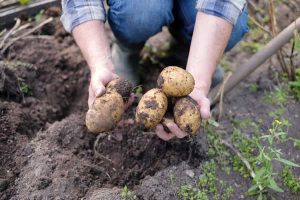 As your potatoes are grown for storage, leave them in the soil until cool weather arrives because they store in such a condition where somewhere is cold but not freezing. The closet in mudroom does not cool off until the skin temperature plunges to 45o at the hour of darkness. Then after digging out the tubers allow them to sit on top of the raised beds for a couple of hours to dry. This brief drying toughens their skin and prepares them for storage. After that gently dismiss any loose soil from tubers and place them in a paper bag.

Hopefully, after reading this article you will be able to grow your own potato by doing little effort and care.

How Long Do Potatos Take To Grow