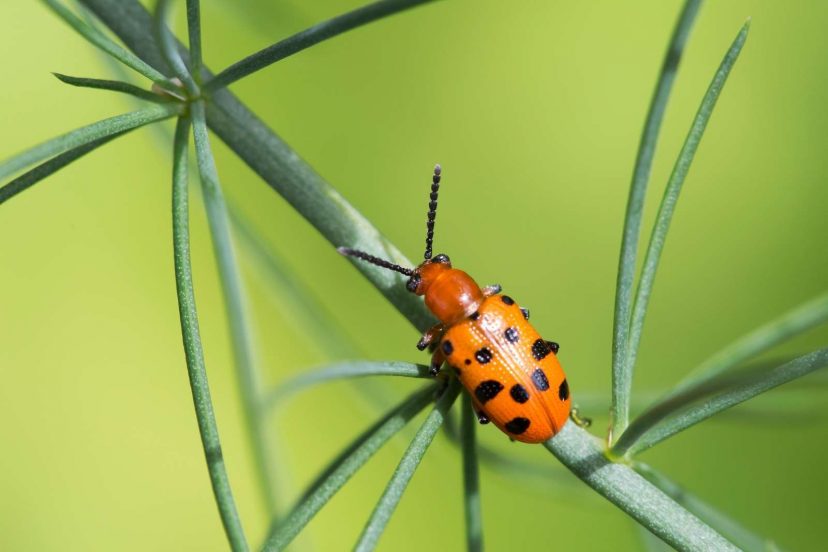 The Asparagus Beetle is a small black and white insect that feeds on asparagus plants. These beetles are native to Europe, including the Mediterranean region, but were introduced into the United States in 1916.

Most often attacking plants outdoors, these beetles can also live indoors during colder months by entering through windows and doors and may cause a considerable amount of damage if left undetected for too long.

Adults of both sexes occur throughout the growing season, the female is hairless. They are predatory inhabit. The adults are almost entirely black with a metallic green sheen on the elytra (wing covers).

The common asparagus beetle lives in the soil during the winter months. The beetles emerge from the soil and lay eggs on the plants. The eggs hatch into grubs that feed on the roots of Asparagus ferns, these grubs may do great damage to plants before they are noticed.

Within a week of its appearance, the adult beetle lays eggs on the host plants. Eggs hatch within 4 to 7 days into whitish, legless grubs which begin feeding on the fern as soon as they emerge.

The larvae emerge within a week of egg-laying. They live in the soil for 1 to 2 weeks, then turn greyish brown and move into the ferns. When they have reached a length of 4 to 6 mm., they drop to the ground, where they pupate.

Then the adult emerges and flies to a new food source, where it lays its eggs.

At 65F (18C) in the laboratory, the entire life cycle takes place in 30 days. Eggs hatch in 8 days and there are 5 larval stages which each last about 10 days.

Two life cycles are common in the northeast, but as many as five are reported in California.

The spotted asparagus beetle appears somewhat different from the common asparagus beetle. It is larger and has a black head, chocolate-colored wing covers, and lacks the scalloped design on its back. It is found mainly in California and adjacent states.

Larvae prefer to feed on the fern's roots before moving upward to feed on stems and foliage. The grubs are semi-pupal and are white and legless. They are commonly found underneath the fern.

Their reproductive cycle is similar to that of the common asparagus beetle. Four to five larval stages, each lasting 10 days, then a pupal stage which lasts about 10 days.

Do Asparagus Beetles Eat Other Plants

Both adult and larval stages of the asparagus beetle feed on asparagus, and in their natural host plant, the white wintergreen (polygonum minus) is the primary host. Many other weeds from around the yard are likely to be attacked by larvae and adults.

Adult beetles will fly to new plants in search of young, tender shoots. As an adult feeds it lays a single egg on the foliage. With such an abundance of food, larvae do not need to mate or mature into adults before they can start producing viable eggs.

Their presence is often announced when spears of asparagus start to turn brown at the tips. The beetles can be seen feeding on the young spears near the soil surface. The brown area of asparagus is caused by an unsightly, sticky discoloration from secretion by the insect.

Beetles will also attack mature asparagus plants, primarily along with the crown of spears and in the ferny tops of older plants. This feeding usually results in a shortening of the spears and a reduction in growth.

Often, spear tips will turn brown but never completely dry out. This browning can take place several months after the first hint of damage and can be confused with drought conditions.

In order to prevent damage, spears should be cut back to within about 6 inches of the soil surface, which will dispose of the beetle larvae. Plump young shoots that have not been damaged are also susceptible to attack and should be removed to reduce risk.

In summer, you can control the beetles by removing the top 2-3 inches of old spears each week. This will prevent adults from laying eggs on the plants.

If you have areas where asparagus has been planted for many years, skip planting in those areas for a while and allow them to go dormant to provide a resting area for beneficial insects and allow any remaining asparagus beetle larvae to be killed off.

Significant defoliation at this point in the season will not reduce the number of spears that will emerge from the crowns, so excess spears should be removed.

While keeping the bushes trimmed short may seem like an effective control method it is not recommended. Cutting back healthy spears when they are still relatively short gives the beetles an opportunity to lay more eggs. Too many eggs can result in a large population of beetles that can cause extensive plant damage, especially in years with warm spring weather and an abundance of weed growth that is available for feeding larvae.

The main damage of the Asparagus Beetle is that it can be a threat to the growth of the asparagus crop. This is because when they eat on the stems, it will cause weak spots to develop. The spear will then break easily during harvest and can rot due to wet soil. The asparagus beetle also leaves behind frass which is a greenish-black powdery substance, from their waste. Frass is hard to remove and may get onto the spears themselves, making them unfit for consumption. They eat the foliage of your plants as well and will leave brown tips.

How to Get Rid of Asparagus Beetles

In most situations, organic treatment for asparagus beetle holes is your best option. This means that you will need to fill the asparagus beetle's hole with a material that they will not be able to escape from. You will want to make sure that this material is not harmful to you or your family.

As soon as you notice asparagus beetles, you will need to take action quickly if you want to prevent them from causing too much damage. Treating them at the first sign of damage is a good idea. This can kill off their larvae before they have a chance to cause any real harm. Once they have laid their eggs, it will be too late to effectively treat them.

If you see any asparagus beetle holes, take action quickly. Failure to do so could put your home at risk.

Cutting asparagus shoots as they appear will prevent the spreading of the asparagus beetles. This means that you can cut down on them throughout the growing season and stop them from reproducing. Asparagus shoots that are already growing will need to be removed.

Even if the spears are damaged, they can still be used. It is recommended that you don’t eat them, though. You might see asparagus beetles in the spears. You should take the spears that have beetle holes and dispose of them in a trash can as soon as possible.

Neem oil can be applied to prevent asparagus beetles. Neem oil will be harmful to pets and other small animals. You should make sure that you only apply the neem oil when you can be watching your pet or other animals for any signs of them ingesting the neem oil.

Coat the spears in pure neem oil in the evening. You should avoid application during the day as this can create a bad chemical reaction. You can also apply this in the morning after checking on them throughout the day.

Collecting berries at the time of their appearance is a good way to prevent asparagus beetles from spreading. You typically want to collect any berries that have fallen on the ground in a container that is indoors. This will prevent them from being eaten by animals.

If asparagus beetle on plants are severe and immediate removal is necessary, you can destroy them. You can do this by boiling them for five to 10 minutes. This will kill the beetles and larvae.

These chemicals are effective at controlling asparagus beetles. They are very harmful to people and pets that eat them. You can apply this directly to the holes or dispose of it in a pet’s water dish.

Beetles that keep coming and coming on an asparagus path may be a sign that you have a pupa infestation. Pupa infestations can be difficult to get rid of, but they are very destructive for the plant as a whole.
Asparagus beetle traps work well in catching these insects. The traps are often placed in areas with a lot of asparagus. You should place them where the bugs will be found.

FOR ORGANIC GARDENING - This bug killer product is perfect for organic gardeners, or as a companion to traditional methods. This product can be sprayed directly on the plants you wish to protect, on the soil around the plant, or in the air.

CONTAINS SPINOSAD - Spinosad is made by a soil microbe that lives on the roots of plants. It is completely harmless to humans, but works quickly on insects, with no known resistance yet.

CONTROL BEETLES AND LARVAE - This insecticide product works great. It destroys the food source that these insects use, and as a bonus, it also kills the eggs as soon as they hatch, or prevent them from hatching in the first place.

CONTROLS A VARIETY OF INSECTS - Not only does this product control the Asparagus Beetle, it also controls other insects such as the Colorado-Beetle, Colorado-Beetle Larva, Southern House and Carpenter Beetle and many more.

MIXING REQUIRED - This concentrate requires mixing before application. Mix it with 1 part concentrate to 9 parts water (5:1).

MIXING INSTRUCTIONS - Use only an old spray bottle, or similar container. Pour 5 parts concentrate to 9 parts water into the container. Stir well to mix evenly.

One bottle will treat up to 20 gallons of water.

The product label advises a 72 hour waiting period after mixing before applying. The company states that the product is effective for up to 3 months, and stresses that a thorough application is necessary for effective results. 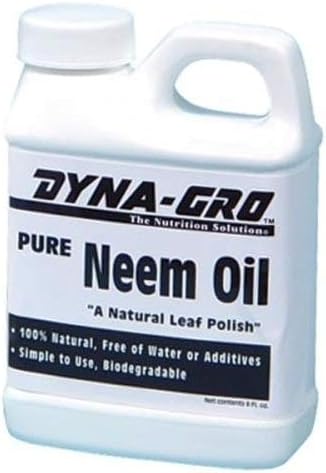 Treat your plants with the powerful and effective antimicrobial and antifungal benefits of Neem Oil.

Neem oil can be used as a foliar spray or as a soil drench, pure Neem Oil is safe for the environment and animals.

Asparagus beetles are a nuisance to any asparagus grower. Luckily, there are many different tactics that can be used to get rid of them. You will want to take action immediately if you notice them on the plant. The most important thing is prevention, so make sure that you don’t cut down leaves in areas where they've already been spotted or had eggs laid on them. You may want to consider using an organic method of treatment if possible, but keep in mind that this may not work well for infestations or big populations of asparagus beetles. In case there is no other choice, treat with products such as Beauvaria bassiana.

A guide: How to Get Rid of Aphid Attack?

Whatever size of your garden once you have to deal with aphids at some point. It…