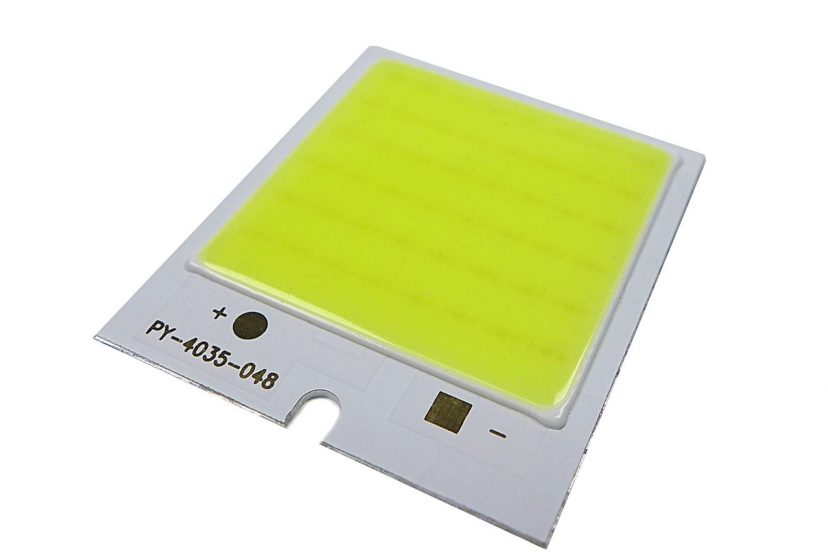 Have you ever heard about COB LED grow lights, and now you are wondering what all the fuss is about?

Then look no further, because I have a treat for you.

In this guide, I would like to discuss the COB LED phenomenon. I will explain what they are, and how they are a substantial advancement for indoor grow light technology and why they are being quickly deployed into several indoor grow rooms all around the planet.

Has LED technology eventually become a viable and inexpensive alternative to replace the large, bulky, and hot HID grow lights?

Do COB LEDs warrant the Price?

Read on and let's find out! if you would like to find out more about full spectrum LED grow lights, have a look at that article as I go deeper into the specifics of LED technology and how it compares to other options.

Click Here To Get To My TOP COB LED Lights

COB stands for Chip-on-Board and describes how LED diodes are packaged together. With chip-on-board technology, many miniature LEDs are mounted in close proximity to a substrate to form a single module.

Essentially, they are combined to form a single, exceptionally powerful light source.

This contrasts with a surface mounted diode (SMD) technology. SMD is the way standard LED grow lights are constructed.

Single diodes are mounted separately to a surface. They can be rather close together, but not quite as close as the very small diodes which compose a COB. Because of this, SMD LEDs each function as a single point of light.

These points of light are usually 3w or 5w chips, with a few manufacturers currently using 10w chips. A single fixture comprises several of these chips.

COB LEDs, on the other hand, function as a single, strong light source and a fixture consists of just some of them. Sometimes, a single COB constitutes the whole fixture.

Many COB LED grow lights comprise fans because they are necessary -- the heatsink is not enough to quickly dissipate the heat generated. These fans help protect the life span of the LEDs, and they help reduce the heat your crops will feel when they get near those lights.

What They Look Like In a way, they seem somewhat like speakers. They come packed in boxes which you can mount over your plants, and you may buy one light, a set of COB LED grow lights, plus they are available in multiples, such as four, six, and even 12 lights.

These are the biggest advantages of COB LEDs for growing:

Deeper canopy penetration: because COBs be one big LED processor (up to 120w) that they are much more powerful than one diode and penetrate far below the canopy

Terrific spectrum for crops: COBs are available in a number of colors, but the most common for growing are warm white and cool white; many fittings combine both for a Fantastic plant light spectrum

Terrific spectrum for people: the white light signifies your plants seem essentially the same as they would under sunlight; no longer pinkish or purplish glow which hides issues till its too late

Better light spread: because COBs are often placed fairly far apart on large fixtures, they protect the plants under more evenly than a smaller light fixture which must spread out from a central point

Performance: COBs give you more power per input and also produce less heat

There aren't many disadvantages when compared to SMD LED lights. If you want a light composed of mostly blue and red diodes, then COBs wouldn't work for you.

Currently COBs are only available in some colors and the only ones that work well for growing are the white ones or the pink ones, with white being by far the most popular.

Another possible drawback comes if a COB fails. If you've only got a couple of these on your fixture, losing one way losing a large part of light. Having a SMD LED, losing one diode doesn't impact the total output much.

Having said that, usually many diodes are attached to the same driver on SMD LEDs, so you'd usually lose many simultaneously.

Here Are The BEST COB LED Light I Recommend: 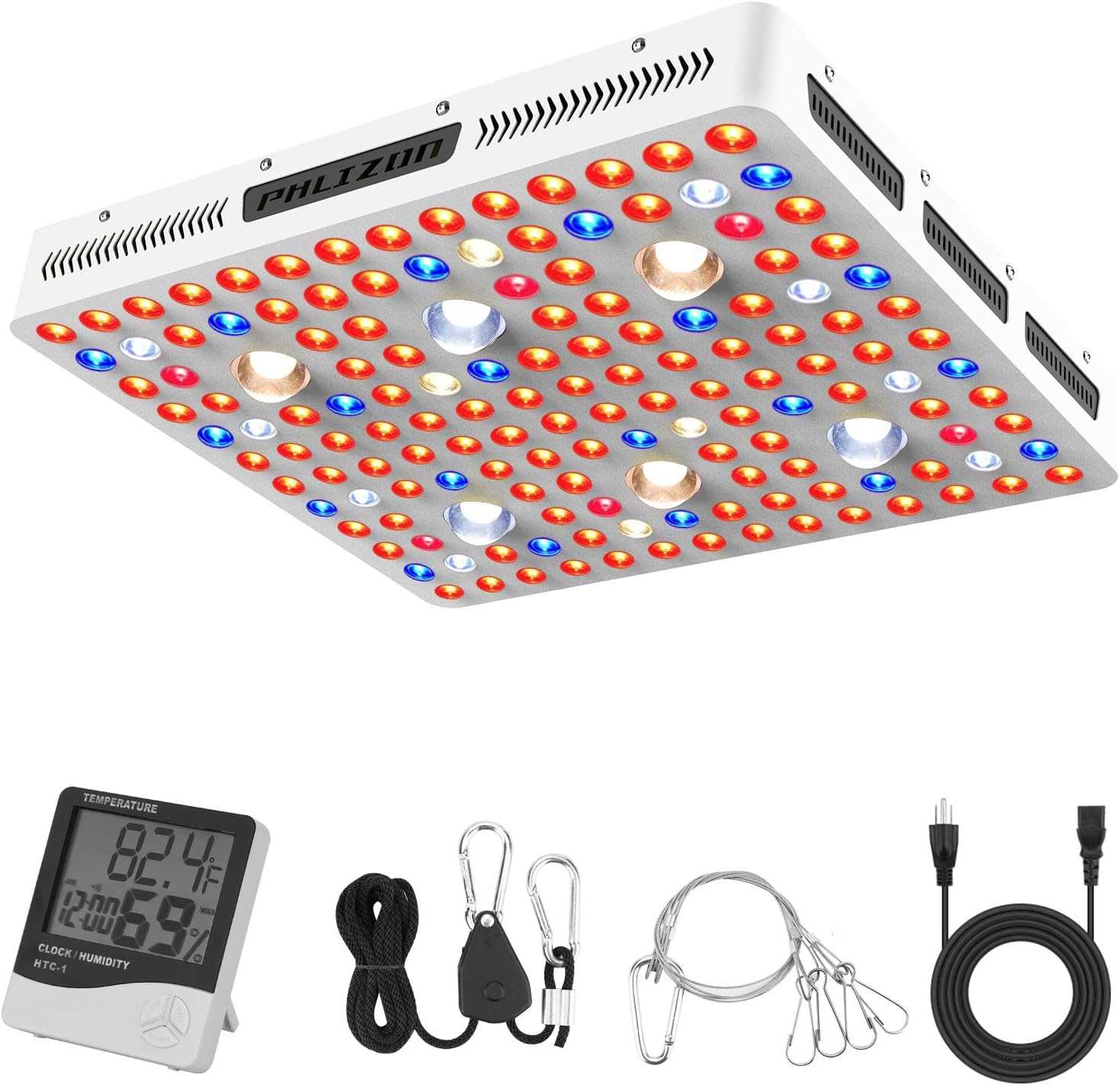 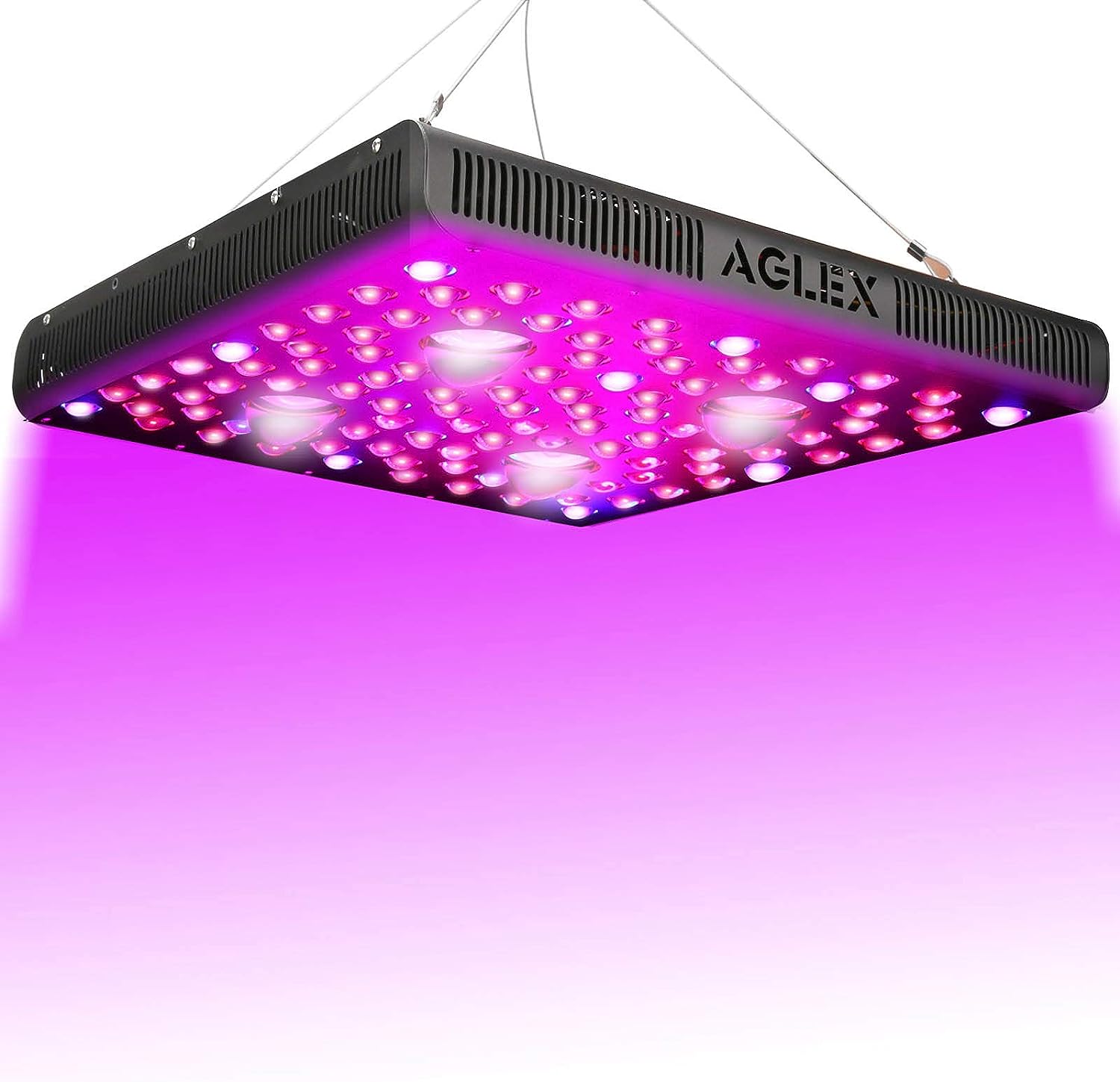 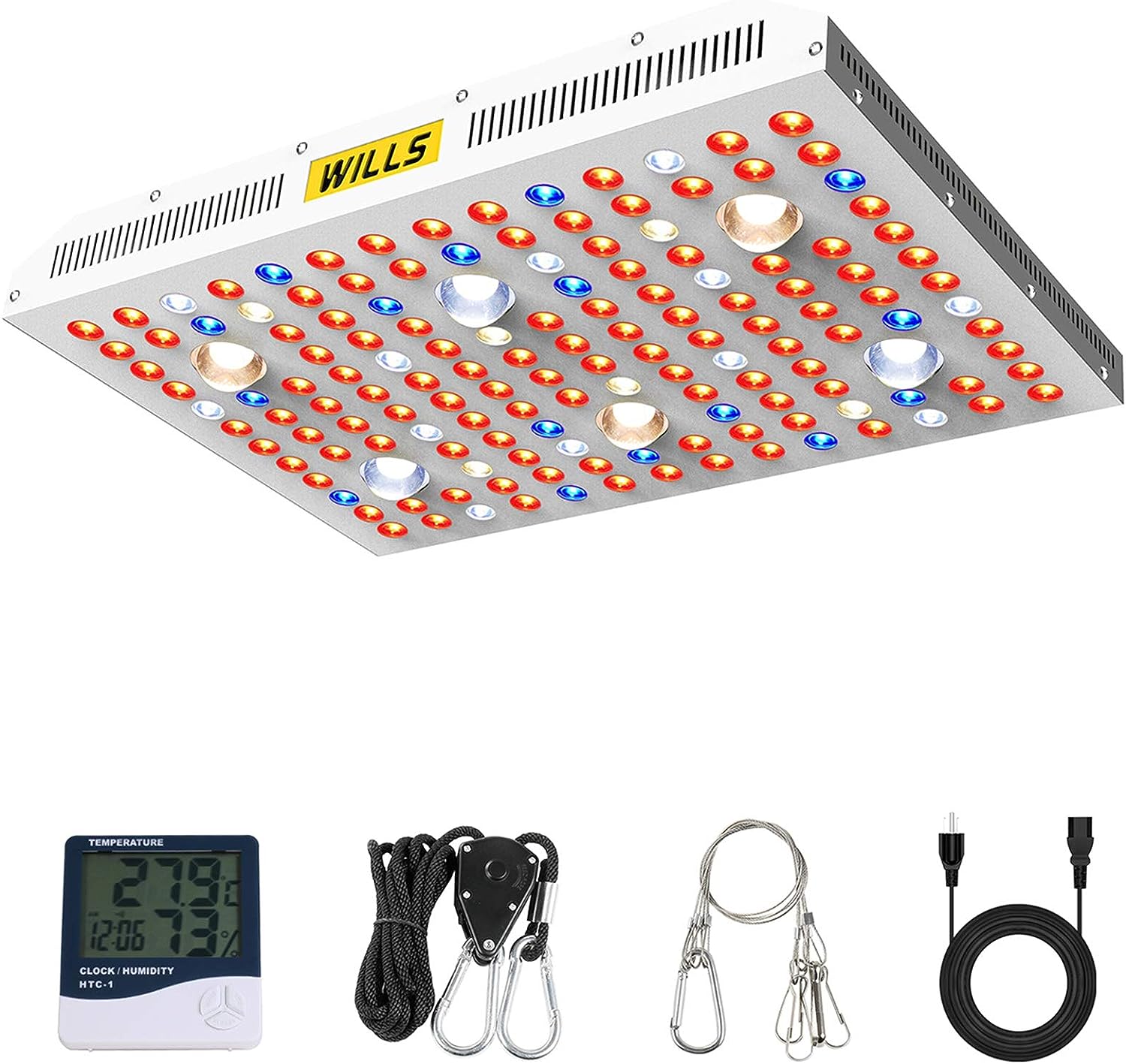 How Does a COB LED Compare to Other Grow Lights?

If you are an old pro when it comes to indoor gardening, then you are likely familiar with the kinds of grow lights available. If you are new to growing plants inside, then this should be a useful resource for you.

High Intensity Discharge (HID) These kinds of bulbs would not be suggested for seedlings, but they would work well for plants that require a great deal of sunlight and can manage extreme levels of light. There are lots of types of HID lights, such as metal halide (MH), ceramic metal halide (CMH or CDM), and high-pressure sodium (HPS). It is safe to say that HPS is the most effective sort of HID lights for growing plants, and several men and women stick to the 600W kind, as they create around 7% more light watt-for-watt than some 1000W HID bulb.

When it comes to life span, however, you're taking a look at an average of 15,000 hours, depending on the sort of HID light you select. The range is somewhere between 10,000 to 24,000 hours. Additionally, you'll require a particular ballast with a specific wattage to use these bulbs. You can create your own, or you could purchase a kit. The initial price of a kit is slightly less expensive than COB LED grow lights.

When it comes to energy efficiency, you can not beat fluorescents. These extended bulbs should be familiar to you if you've ever worked in an office. They appear to last forever, and they cost next to nothing to operate. If you use tube-style fluorescent lights, you will require a ballast to conduct them, and you can expect somewhere between 30 lumens per watt to 90 lumens per watt. They are not the most extreme of lights, but they are great for sprouting seeds or even growing herbs.

Possibly the best feature of fluorescents is a lifetime: You can expect a lifespan of 10,000 to 20,000 hours, depending on if you select compact fluorescent lights (CFLs), which are somewhat brighter and have shorter life spans, or tube-style, which are softer lights with longer life spans. These are possibly the most affordable grow lights available, at least for initial price, but it is important to take energy and lifespan prices into consideration.

Light Emitting Diode (LED) Tiny LEDs are used in several rows on a lighting system to make a grow light, which helps up the wattage of the device. Each bulb normally measures .5w to 1w in electricity, but some LEDs go as large as 3w to 5w each. The higher the wattage, however, the more heat is created.

The COB LED grow lights bunch a whole lot of little bulbs together into a single light source, which measures, as an instance, 300w, but due to the way it is designed, it draws less power, making it more energy efficient.

In comparison to other alternatives, LED grow lights are a little pricier, but you are considering 50,000 to 90,000 hours of life from these bulbs, which are more cost-efficient ultimately. Additionally, the energy savings adds up.

If you've decided you need to go with the most current in grow light technologies, then take a look at these COB LED grow lights testimonials.

How To Choose The Best Indoor Grow Lights For Plants

What Makes This LED Light Better?

Before we get to the reviews, let us take a look at why COB LED chips are better. I'll keep this short, because you've probably already done the research on this, or you wouldn't have found yourself on this page.

This guide has more info.

The Benefits of chip-on-board LEDs are:

Compactness: much more LEDs fit into a much smaller area, meaning greater output from a smaller region

High-Intensity: since more LEDs are packed into a smaller area, the light is more intense, meaning deeper canopy penetration

Design simplicity: only use 1 circuit with two contacts to energize all of the chips on the COB array, reducing the number of elements needed

Lower failure rate: because of lower heat generation and better heat dissipation and fewer welding factors (since each processor is mounted directly on the substrate, rather than soldered in place), quality COBs have a lower failure rate

The principal drawback is the fact that COB LEDs is not yet available in each colour spectrum. Luckily, they can be found in the colours best suited to growing plants (pink and white ). The first 4 lights under use warm white and cool white COBs, while the last fixture utilizes pink ones.

Unless you are just getting started with a tiny indoor garden or a few potted herb plants, the hands-down best option among the very best COB LED grow lights needs to be the Morsen MAX4 3600W COB Led Grow Light Full Spectrum for Indoor Plant Greenhouse Grow Lamp Kit. This light enables you to adjust the amount of light you want on or off, it is strong, and it covers a huge area. In spite of the 3600 watts, it is energy-efficient, so you won't find a giant increase in your electrical bill.

Whether you are growing peppers and tomatoes, flowers, herbs, or cannabis (in places where that is legal, you lucky dog, you), a COB LED grow light can assist with seed sprouting, flowering, and yields. And it is going to keep energy prices down. Just don't look directly at these super-intense lights, or wear sunglasses.

How To Choose The Best Indoor Grow Lights For Plants

Grow lights are fantastic for indoor seed starting, as well growing as light-loving houseplants, like orchids.…

We can make a variety of claims about why the Gavita LED is indeed good, but…

The principal reason growers chose LEDs over conventional lighting is due to the electricity savings. LED…